When I tell people my husband and I met on Twitter they usually react in the same way. First, they show genuine excitement and exclaim something like, “Oh wow,” often adding a follow-up remark like, “That is so cool!” Then there is a pause, a head tilt, maybe a wrinkled nose, a deep breath, and the question, “Wait, how?”

It’s a good question because sometimes it even baffles me. How exactly did this happen? When I was younger I was against meeting people to date online because I really wanted to meet someone “organically.” To me that meant in person, at work, school, or through friends. Setting up an online dating profile felt uncomfortable. I tried it once or twice before acknowledging that it just wasn’t right for me. After a year or two of being single I stopped thinking about dating and just lived my life. I started a blog, joined Twitter, moved to Asheville, NC, made a few friends, bought a house, changed jobs, and well, my life became busy and full.

After a few years, life in Asheville changed for me, and I decided it was time to sell my house and perhaps move on to a new town. Each night when my house was on the market I would pack a few boxes after work, watch TV, and check out what was happening on Twitter. Asheville had, and probably still has, a strong and friendly Twitter network. It’s a small town and meeting people from Twitter “in real life” isn’t that uncommon. In fact, more than once I was in a coffee shop and spotted one of the people I followed sitting nearby. It’s almost as exciting as a celebrity sighting but not quite.

So anyway, there I was packing my house and browsing Twitter when I saw someone say something about strawberries and wine, two of my favorite things. I replied.

I must have followed him initially for some reason but I can’t say when or why. Sometimes I find people on Twitter when another user re-tweets them or I see their name mentioned in conversations. Adam was fairly active on Twitter when I first started following him. His posts ranged from comments about the daily struggles of life…

…to his life philosophies.

Meanwhile, I was no slouch on Twitter either. I mean, look at this gem. How could you not be intrigued?

Over the next few months we occasionally tweeted with each other about trivial and not so trivial things.

After we had been tweeting back and forth for awhile, I made a move. 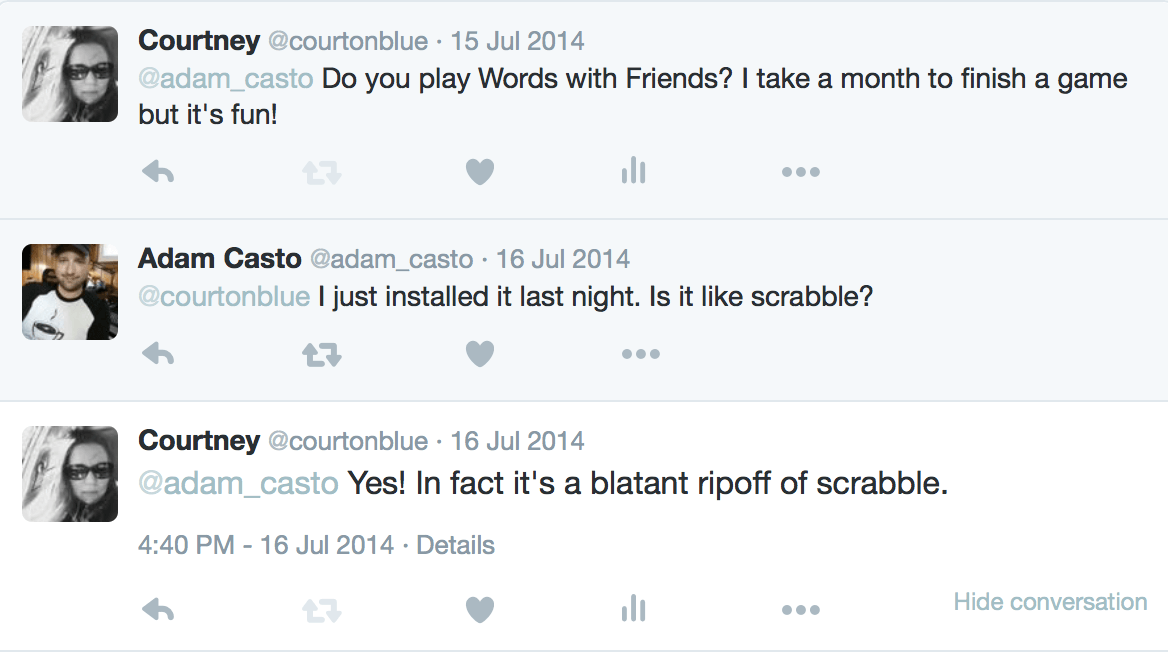 Not long after, something happened. He sent me a Direct Message.  Just like that, our Twitter relationship got serious.

Honestly, my first thought was, “Oh my gosh some guy from the internet just sent me a direct message. This is getting too weird. I’m out.” I had refined my flight reflex over the years but this time I decided not to run. After all, it was just Twitter right? What could happen? 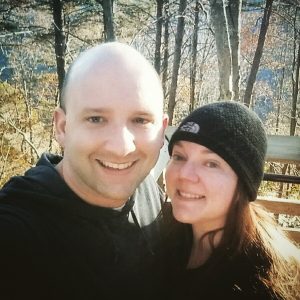 For the next month or so we sent each other direct messages every night. Our conversation was easy and over time it turned from friendly to familiar to flirty. I’m not even sure how it happened. He went from being a stranger on the internet to someone who gave me butterflies with his Twitter notifications. Finally, on a warm August day, we met in person for the first time in front of the Thomas Wolfe house in downtown Asheville. We have been together ever since.

Looking back, I suppose it’s not unlike how a relationship starts through other mediums, whether in person or online. You notice each other, you talk, your conversation deepens, feelings develop, yada, yada, yada, you get married. Though it was a bit unconventional at first, our relationship grew organically. We didn’t start talking with any expectations of a relationship. It just happened. Thank you Twitter!

Tell me in the comments, how did you meet your partner? Do you know anyone else who met through Twitter? Here are a few other stories I found about couples who met on Twitter.

We’re Getting Hitched! How I Met My (Almost) Husband on Twitter