Why Not Me? by Mindy Kaling 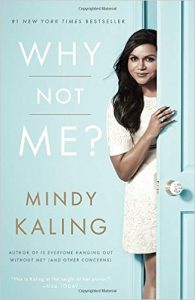 The Office was never a show I watched consistently. I would go through phases of watching for a few consecutive weeks but it was easy for me to make other plans or just plain forget it was on. I can’t say that Mindy Kaling really stood out to me on the show (sorry Mindy!) I do remember seeing her name in the credits and being impressed that she was a writer on the show. Since The Office she has created her own show called The Mindy Project, currently airing on Hulu. It’s hilarious. I look forward to new episodes and I found myself thinking, “I wonder what else she has to say?” Turns out, she has written two books so far. Yay for me and yay for you. Her first book, Is Everyone Hanging Out Without Me? is an easy, fun read that gives you a look inside how she grew up, grew her career, and ended up as a writer on The Office. She graduated from college in 2001, the same year as me, and lived in New York during 9-11, which she only mentions in passing. We have just enough in common that I think we could have been friends had I opted to attend Dartmouth, not that it was an option mind you.

After finishing her first book I immediately picked up her second, Why Not Me? By this point in her life Mindy had moved on from The Office and had started working on The Mindy Project. “Why Not Me” is an entertaining collection of essays that gives the reader a look into Mindy’s successful life in Hollywood. One thing is clear, she works hard. Really hard. She is also witty, smart, funny, and refreshingly down to earth. Mindy, I will sneak out of a party with you any day.